Extreme Misrepresentation: USGCRP and the Case of Floods 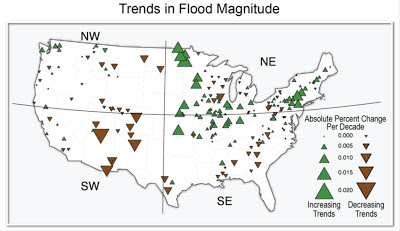 Here I explain that in an area where I have expertise on, extremes and their impacts, the report is well out of step with the scientific literature, including the very literature it cites and conclusions of the IPCC. Questions should (but probably won't) be asked about how a major scientific assessment has apparently became captured as a tool of advocacy via misrepresentation of the scientific literature -- a phenomena that occurs repeatedly in the area of extreme events. Yes, it is a draft and could be corrected, but a four-year effort by the nation’s top scientists should be expected to produce a public draft report of much higher quality than this.

Since these are strong allegations, let me illustrate my concerns with a specific example from the draft report, and here I will focus on the example of floods, but the problems in the report are more systemic than just this one case.

What the USGCRP report says:


Infrastructure across the U.S. is being adversely affected by phenomena associated with climate change, including sea level rise, storm surge, heavy downpours, and extreme heat… Floods along the nation’s rivers, inside cities, and on lakes following heavy downpours, prolonged rains, and rapid melting of snowpack are damaging infrastructure in towns and cities, farmlands, and a variety of other places across the nation.

The report clearly associates damage from floods with climate change driven by human activities. This is how the draft was read and amplified by The New York Times:

“Climate change is already affecting the American people,” declares the opening paragraph of the report, issued under the auspices of the Global Change Research Program, which coordinates federally sponsored climate research. “Certain types of weather events have become more frequent and/or intense, including heat waves, heavy downpours, and, in some regions, floods and droughts."

To underscore its conclusion, the draft report includes the figure at the top of this post (from Hirsch and Ryberg 2011), which shows flood trends in different regions of the US. In a remarkable contrast to the draft USGCRP report, here is what Hirsch and Ryberg (2011) actually says:


The coterminous US is divided into four large regions and stationary bootstrapping is used to evaluate if the patterns of these statistical associations are significantly different from what would be expected under the null hypothesis that flood magnitudes are independent of GM [global mean] CO2. In none of the four regions defined in this study is there strong statistical evidence for flood magnitudes increasing with increasing GMCO2.

Got that? In no US region is there strong statistical evidence for flood magnitudes increasing with increasing CO2. This is precisely the opposite of the conclusion expressed in the draft report, which relies on Hirsch and Ryberg (2011) to express the opposite conclusion.


There is limited to medium evidence available to assess climate-driven observed changes in the magnitude and frequency of floods at regional scales because the available instrumental records of floods at gauge stations are limited in space and time, and because of confounding effects of changes in land use and engineering. Furthermore, there is low agreement in this evidence, and thus overall low confidence at the global scale regarding even the sign of these changes.

The SREX is consistent with the scientific literature -- neither detection (of trends) nor attribution (of trends to human forcing of the climate system) has been achieved at the global -- much less regional or subregional -- levels. Yet, USGCRP concludes otherwise.

The leaked IPCC AR5 SOD reaffirms the SREX report and says (here in PDF), in addition to documenting a signal of earlier snowmelt in streamflows, no such signal of increasing floods has been found:

The IPCC has accurately characterized the underlying literature:

Given the strength of the science on this subject, the USGCRP must have gone to some effort to mischaracterize it by 180 degrees. In areas where I have expertise, the flood example presented here is not unique in the report (e.g., Hurricane Sandy is mentioned 31 times).

Do note that just because the report is erroroneous in areas where I have expertise does not mean that it is incorrect in other conclusions. However, given the problematic and well-documented treatment of extremes in earlier IPCC and US government reports, I'd think that the science community would have its act together by now and stop playing such games.

So while many advocates in science and the media shout "Alarm" and celebrate its depiction of extremes, another question we should be asking is, how is it that it got things so wrong? Either the IPCC and the scientific literature is in error, or the draft USGCRP assessment is -- But don't take my word for it, check it out for yourself.
Posted by Roger Pielke, Jr. at 1/15/2013 09:15:00 AM
Email ThisBlogThis!Share to TwitterShare to FacebookShare to Pinterest
Newer Post Older Post Home