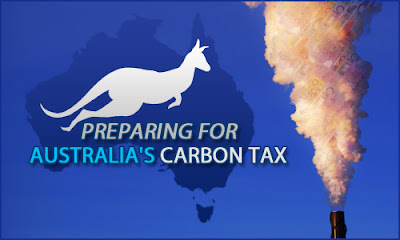 I have in the past given the title of "Fantasy Island" to the UK for pursuing an impossible approach to carbon dioxide emissions reductions. Over the next week a much bigger island will take that title (yes, yes, it is a continent, but this is a fantasy!). On July 1, Australia's carbon tax comes into effect, which has already prompted a new round of cheering and critiquing.

Representative of the cheering, Nature Climate Change has just published an essay that celebrates the tax as a model for other countries, without noting that it has been used intentionally as a political wedge issue making it deeply unpopular, and more importantly, that it will do almost nothing to help Australia to meet its short-term emissions reductions targets. This sort of willful blindness is endemic in climate policy discussions among those calling for action. Perhaps the thinking is that maybe if we pretend, then the fantasy will become real.

Here is the bottom line from the quantitative analysis:

Australia would need to undertake a herculean effort comparable to the level of effort required to build and put into service dozens or more nuclear power plants by 2020 or thousands of solar thermal plants. Were this ‘‘level of effort’’ to be expressed in terms of windmills or other existing technologies the magnitude would be equally as daunting. When coupled with very aggressive efficiency and renewable objectives the level of effort is still enormous. Australia, of course, has no nuclear power plants, and the technology is hotly debated, so even building one plant would be an enormous achievement.

The point being made here of course is not about nuclear power or even solar thermal plants, but about the enormous level of effort needed to meet the proposed short-term targets for Australian emissions reduction. The magnitude of the effort required helps to explain why policy makers look to offsets and other accounting schemes to achieve targets. Regardless of the nature of the legislation ultimately adopted in Australia, the actual decarbonization of the Australian economy will all but certainly fall short of the rates needed to hit the emissions reduction targets.

Of course, when pointing out such things the most common response is likely to be -- "Look boss, de plane, de plane!" I explain in the paper:


Australia has a very carbon intensive economy, thus its ability to dramatically accelerate the decarbonization of its economy offers the promise of many valuable lessons for other countries around the world. However, a focus on targets and timetables for emissions reduction that will be impossible to meet in practical policy implementation runs the risk of engendering public cynicism and even opposition. Currently the nature of international climate politics is such that aggressive promises are met with applause, regardless of their feasibility.

In the coming 10 days, we should expect much discussion of  Australia's carbon tax, but very little of it touching the ground. Welcome to Fantasy Island!
Posted by Roger Pielke, Jr. at 6/18/2012 07:57:00 AM
Email ThisBlogThis!Share to TwitterShare to FacebookShare to Pinterest
Newer Post Older Post Home