Follow Up: Revisiting the 2010 IPCC Press Release on Economics of Disasters 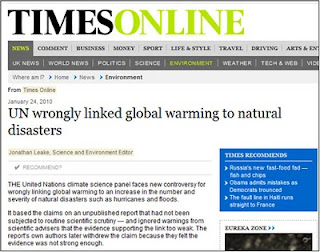 As I prepared for my lunch seminar which I am giving later today. I had a chance to revisit the press release issued by the IPCC on January 25, 2010 in response to an article that appeared in the UK Sunday Times one day earlier which detailed failures of the IPCC AR4 related to claims made about climate change and disasters.

The Sunday Times article was about how the 2007 IPCC AR4 mishandled the issue of the economic toll of disasters and climate change. With the advantage of hindsight, we can now see that the claims made in the Sunday Times article have been completely vindicated and the IPCC press release was full of misinformation (to put it kindly).  This post has the details.

The IPCC press release of 26 January 2010 started out as follows (PDF):

What did the Sunday Times article claim?


The United Nations climate science panel faces new controversy for wrongly linking global warming to an increase in the number and severity of natural disasters such as hurricanes and floods.

It based the claims on an unpublished report that had not been subjected to routine scientific scrutiny — and ignored warnings from scientific advisers that the evidence supporting the link too weak. The report's own authors later withdrew the claim because they felt the evidence was not strong enough. . .

The new controversy also goes back to the IPCC's 2007 report in which a separate section warned that the world had "suffered rapidly rising costs due to extreme weather-related events since the 1970s".

It suggested a part of this increase was due to global warming and cited the unpublished report, saying: "One study has found that while the dominant signal remains that of the significant increases in the values of exposure at risk, once losses are normalised for exposure, there still remains an underlying rising trend."

The Sunday Times has since found that the scientific paper on which the IPCC based its claim had not been peer reviewed, nor published, at the time the climate body issued its report.

When the paper was eventually published, in 2008, it had a new caveat. It said: "We find insufficient evidence to claim a statistical relationship between global temperature increase and catastrophe losses."

Despite this change the IPCC did not issue a clarification ahead of the Copenhagen climate summit last month. It has also emerged that at least two scientific reviewers who checked drafts of the IPCC report urged greater caution in proposing a link between climate change and disaster impacts — but were ignored.

None of these claims are "misleading and baseless" but are factually correct. (Note that full text of the Times article can be found here.)

In its press release, the IPCC explained its position by re-asserting what was claimed in the report:


one study detected an increase in economic losses, corrected for values at risk, but that other studies have not detected such a trend

We now know that the "study" that was cited by the IPCC (a white paper from a workshop that I had organized) did not contain any analysis of trends. Instead, that paper was intentionally miscited by one of the chapter's authors to circumvent the deadline for inclusion of relevant publications. When the miscited paper actually did appear in the literature it said this:

Thus, the paper that the IPCC wanted to cite did not say what the was claimed in a specially invented graph that was made up for the report but which did not appear in the miscited paper. Further, the IPCC intentionally miscited it to get it into the report in the first place. Three bad moves.


In writing, reviewing, and editing this section, IPCC procedures were carefully followed to produce the policy-relevant assessment that is the IPCC mandate.

The IPCC did not follow its procedures for citing grey literature, for following its own deadline for publications, for proper citation of source material and included a graph that cannot be found in any literature anywhere. The IPCC press release was thus wrong again -- the procedures were ignored, not "carefully followed."

The bottom line is that the Sunday Times article has proven correct comprehensively on the substantive and procedural aspects of the IPCC's failures (the substance of which has recently been reaffirmed by the IPCC SREX report).

The IPCC 26 January 2010 press release still sits uncorrected on the IPCC website (here in PDF). If the IPCC has a commitment to getting things right, shouldn't it correct "baseless and misleading" claims that it has made?
Posted by Roger Pielke, Jr. at 4/09/2012 10:21:00 AM
Email ThisBlogThis!Share to TwitterShare to FacebookShare to Pinterest
Newer Post Older Post Home