The New York Times reports today that childhood mortality has declined significantly in Africa in recent years, citing a remarkable figure of 10,000 less deaths per day. Here is an excerpt from the story: 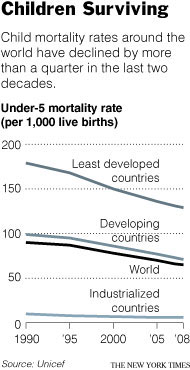 f children dying before their fifth birthdays each year has fallen below nine million for the first time on record, a significant milestone in the global effort to improve children’s chances of survival, particularly in the developing world, according to data that Unicef will release on Thursday.

The child mortality rate has declined by more than a quarter in the last two decades — to 65 per 1,000 live births last year from 90 in 1990 — in large part because of the widening distribution of relatively inexpensive technologies, like measles vaccines and anti-malaria mosquito nets.

Other simple practices have helped, public health experts say, including a rise in breast-feeding alone for the first six months of life, which protects children from diarrhea caused by dirty water.

Wealthy nations, international agencies and philanthropists like Bill and Melinda Gates have committed billions of dollars to the effort. Schoolchildren and church groups have also pitched in, paying for mosquito nets and feeding programs.

Taken together, they have helped cut the number of children under 5 who died last year to 8.8 million — the lowest since records were first kept in 1960, Unicef said — from 12.5 million in 1990.